As a teacher I am often asked how are songs made?  Songs use many techniques that I will discuss over the next few months.  First I will explain the Harmonized Major Scale. This is the foundation of all Western Hemisphere music. Using just the notes of the C major scale lets see how the family of chords are created.

These are also the white keys of the piano. By taking every other note in a group of three notes – playing them simultaneously creates chords. This process is repeated for each of the seven notes (also called scale degree) of the major scale. We use large and small roman numerals to indicate a chords position and type. This process allows one number systems to apply for all fifteen written keys. See below:

The chords below are the note names – within each chord. Also called a triad.

Now written on the treble staff:

Then transpose to the other 14 keys (twelve notes – fifteen written keys). 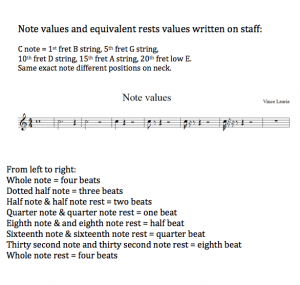 All materials for personal use only.